The Agreed Syllabus has to ‘reflect the fact that the religious traditions in Great Britain are, in the main, Christian whilst taking account of the
teaching and practices of the other principal religions represented in Great Britain.’

The Birmingham approach is designed to be inclusive for all children across our super-diverse city enabling each one to be respected and understood.
The intent of Birmingham’s character-driven approach is to encourage the development of 24 dispositions, or values. The dispositions were created by conference members and have been agreed unanimously. The dispositions derive from a number of sources including the Cardinal Virtues from the Classical tradition, Theological Virtues and Religious Practice. They are equally applicable to, and inclusive of, the religious, those who have an established non-religious world view and those classing themselves as ‘nones’.

Importantly the dispositions were created by conference members representing all these groups and are therefore ‘religious and non-religious’.
The dispositions both define and promote a flourishing personal, spiritual and moral character. Examples of the dispositions include, ‘Living By Rules’ and ‘Creating Unity And Harmony’. Such dispositions are the starting point for all study in Religious Education, the order and complexity in which they are presented being influenced by child development. A universal perspective is adopted as the starting point for understanding each disposition, gradually exposing pupils to a growing number of Religious Traditions and Non-Religious Worldviews as pupils engage with the dispositions. The dispositions encourage pupils to think about, and act upon, a growing understanding of their own faith or viewpoint, whilst acknowledging their neighbour’s perspective.

Lessons focus on discussion and guidance to assist the formation of character-based judgements through the acquisition of knowledge.

The Birmingham Agreed Syllabus is particularly appropriate for a twenty-first century education where quality is defined in terms of an education which is cohesive rather than fragmented, developing children holistically to become happy, confident and ambitious. Understanding and living out the dispositions has positive effects on children’s wellbeing and mental health.

The Dimensions of Learning: 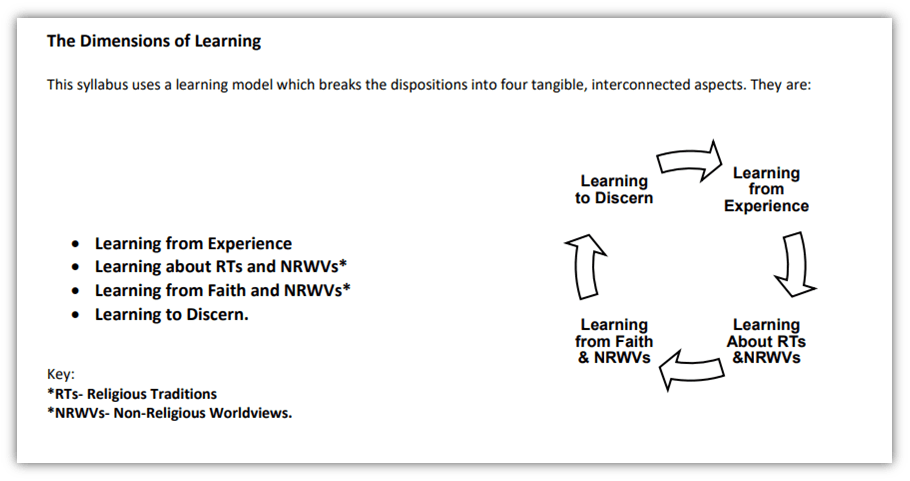 Each disposition is initially encountered by discovering what pupils know about the concept from their experiences. This way of exploring the disposition is particularly inclusive as the full range of perspectives represented in the classroom can be harnessed. This dimension addresses the concern that pupils from a background not identifying with the religious or non-religious, a ‘none’, may find it difficult to access religious content or established non-religious worldview content since they may not perceive the relevance of it to their own lives. Some may have a personal ideology to which they adhere and on which they will want to reflect, but all will have relevant experiences against which to examine their thinking.

Learning from Experience is therefore a powerful and universal foundation from which to move on to explore the other dimensions of the disposition.
This dimension also enables teachers to make effective links between the disposition and the framework of Birmingham City Council’s Curriculum Statement. It enables teachers to link Religious Education to other congruent curriculum areas such as Relationships and Health Education; Personal, Social, Health and Economic Education, and widespread curriculum interventions in Birmingham, such as UNICEF’s Rights Respecting Schools’ Award.

In Birmingham, Religious Education is open, inclusive and represents diverse convictions in a fair and honest manner that is accessible to all. As pupils approach successive Key Stages, they will have the opportunity to learn about a growing range of different religious traditions and non-religious worldviews, the balance and selection recognising that Christianity is the predominant faith in the country.
Pupils will acquire knowledge of religious traditions and non-religious worldviews enabling an understanding of their own faith or established view and those of others. Additionally, this knowledge will enable pupils to understand others around them as they encounter diverse communities, festivals and places of worship that are part of the everyday life of this multifaith city. Such understanding feeds positively into Birmingham’s Community Cohesion Strategy. Crucially, ‘such knowledge enables pupils to identify, challenge and resist radical views.’
Pupils’ appreciation of the dispositions is enriched through explicit reference to religious and non-religious traditions. In this way, pupils will encounter a variety of narratives, rituals, events and sacred texts, while gaining an understanding of why people act according to their beliefs and views in order to live well.

3. Learning from Faith and Non-Religious Worldviews

The life-enhancing expression of the disposition, is then explored in age-appropriate ways. In doing so, pupils will be supported as they reflect on their own practice in the light of their experiences so that they can to learn to live well. In Religious Education character is developed through a growing acquisition of religious knowledge and knowledge of non-religious worldviews. To develop as a whole person means to grow intellectually, emotionally and behaviourally; sometimes referred to as developing cognitively, affectively and conatively.

Following the Birmingham approach to Religious Education, pupils will develop:

Intellectually (or cognitively):
• Through developing knowledge and understanding of religious traditions and non-religious worldviews;
• by evaluating and reflecting on these in the light of their own experiences;
• by developing informed judgment.

Emotionally (or affectively):
• through having their feelings deepened;
• by acknowledging, and responding to, shared human experiences, such as joy, grief, thankfulness, care;
• by expressing any personal reflection, which could include the spiritual or religious in words, or through other media.

Behaviourally (or conatively):
• through being encouraged to act responsibly;
• by cultivating widely recognised values and virtues such as honesty and integrity;
• by being motivated to act upon their new-found understanding

In learning to critically interpret and evaluate the content that is presented, pupils will grow in their ability to discern.

Through these opportunities to critically evaluate, pupils’ religious literacy will be developed in making sense of, and being able to reflect on,
differing forms of religious and non-religious practice within the city in which they live and beyond.

Learning about the Religious Traditions and Non-Religious Worldviews
The second dimension of learning is explored through learning about:
Religious Traditions
The nine religious traditions identified as being those with the greatest number of adherents in Birmingham at the last census available at the
time of writing are represented in the syllabus. They are in alphabetical order:
• Bahá’í
• Buddhism
• Christianity
• Hinduism
• Islam
• Jainism
• Judaism
• Rastafari
• Sikhism.

We use necessary cookies to make our site work. We'd also like to set optional analytics cookies to help us improve it. We won't set optional cookies unless you enable them. Using this tool will set a cookie on your device to remember your preferences.

Necessary cookies enable core functionality such as security, network management, and accessibility. You may disable these by changing your browser settings, but this may affect how the website functions.